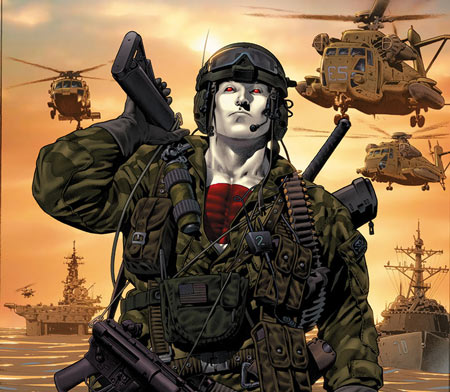 In the midst of UNITY…jump into the ongoing adventures of Valiant’s next breakout heroes with an all-new wave of Valiant zero issues in February and March!
Discover the origins and secret early exploits of the fan favorite heroes of the Valiant Universe right here with four essential jumping-on points, designed to bring new readers up to speed and lay the foundation for the next year of Valiant’s monthly series!

Valiant’s all-new #0 initiative kicks off in February with ARCHER & ARMSTRONG: ARCHER #0 – revealing, at last, the untold story of young Obadiah Archer, where he came from, and just how can he do the incredible things that he does! (Which is everything, remember?) From the minds of writer Fred Van Lente and artist Pere Perez, start reading here to peer inside the war journal of a teenage assassin!
“[The] Archer #0 story is fairly dark and grim, because it involves Archer’s mind-numbingly horrible childhood,” writer Fred Van Lente told Newsarama today in an exclusive interview. “It’s a breather in the sense of less things explode and there are less crowd scenes than “Sect Civil War,” but I think on an emotional level and a character level we maintain the same steamroller pace.”

Also in February, the all-star creative team of Christos Gage, Joshua Dysart, and ChrisCross unleash BLOODSHOT AND H.A.R.D. CORPS: H.A.R.D. CORPS #0! Hey, remember the 90s? The most elite assets of Project Rising Spirit are teaming up for an early mission together — but, in the decade of dial-up, the technology is far from perfect and bugs are bound to pop up in the wetware…with disastrous results…

Then, coming in March, artist Tom Fowler returns to pull double duty with the world’s worst superhero team for QUANTUM AND WOODY: THE GOAT #0 – co-written by ongoing series writer James Asmus! Are heroes born or are they bred? Who – or what – spawned the powerhouse of animal husbandry known simply as Vincent Van Goat?