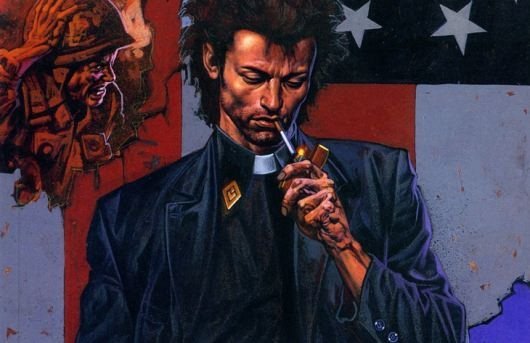 In less than a decade AMC has gone from being that channel that Turner Classic Movies was so much better at to having the market cornered on edgy and provocative original television programming that reaped the highest ratings on basic cable and set the online chat room water coolers ablaze with discussion and debate. With Breaking Bad having recently come to a close and the finale of Mad Men getting closer by the day, the network is going to need a new show in its bullpen to bring in the audiences and word of mouth that lackluster efforts like Rubicon, The Killing, and Low Winter Sun have failed at garnering. As they did with their Sunday night horror-drama blockbuster The Walking Dead, AMC is looking to the world of comics for inspiration.

The network is rumored to be ordering a pilot based on the DC/Vertigo comic series Preacher that writer Garth Ennis and artist Steve Dillon (with beautiful painted covers by Glenn Fabry) for 66 issues from 1995 to 2000. Five one-shot specials and a four-issue spin-off miniseries based on one of its antagonists were also published with scripts by Ennis and art by various collaborators.

The series revolved around Jesse Custer, a preacher in a dumpwater Texas town who becomes an entity called Genesis that was the product of a one night stand between an angel and a demon. Genesis gives Custer the power to command others to do his will by speaking to them in the voice of God.

The Lord Almighty Himself is so terrified by Genesis’ creation that he abandons his throne in Heaven and goes into hiding, ticking Custer off to no end. With the help of his pistol-packing ex-girlfriend Tulip O’Hare and a Irish junkie vampire named Cassidy, the preacher sets out to track God down and make Him face the consequences of His actions. The trio encounters a universe of pathetic, deranged, evil, and sometimes decent individuals in their travels. Recurring characters include the diabolical Herr Starr, leader of the powerful criminal organization the Grail, and a good-hearted teenager who attempted suicide after the death of Kurt Cobain and barely survived with a deformed face. Everyone calls him Arseface.

Preacher‘s run in the comics was comprised of several complicated story arcs that ran for multiple issues, with precious few standalone stories. These plots were violent, sexual, blasphemous, profanely funny, and surprisingly tender at times. Ennis and Dillon’s classic comic has been earmarked for a feature film adaptation many times in the past. Rachel Talalay (Tank Girl) was the first director attached in the late 90s, with Ennis writing several script drafts based on the first seven issues and James Mardsen (X-Men) in talks to play Custer. Kevin Smith, a professed fan of the comic, and his View Askew Productions became involved at one point to help get Talalay’s version financed at Miramax, but studio honcho Bob Weinstein didn’t understand the comic or wanted to share profits from a potential movie with another studio. D.J. Caruso (Eagle Eye) was another director looking to make a Preacher movie a few years ago. Fans weren’t too enthused by the possibility that his frequent leading man Shia Labeouf was also Caruso’s choice for the role of Custer. The last time a movie was discussed Oscar-winner Sam Mendes (Skyfall) had signed on to direct at Columbia Pictures with Neal H. Moritz producing.

AMC isn’t the only cable network to have expressed interest in a Preacher television series. In 2006, HBO – the second most logical home for such a daring show – hired directors Mark Steven Johnson (Daredevil) and Howard Deutch (Pretty to Pink) to produce their own pilot with Johnson writing and Deutch directing. Ennis was even commissioned to create original stories not based on the comics. The team’s ambitious plans were soon scuttled when HBO got cold feet over the series’ potential to attract controversy over its dark tone and religious content. If Preacher becomes the latest series on AMC – if the rumors are to be trusted – it will have a veritable Hollywood heavyweight in its corner.

According to Jim Vejvoda at IGN, AMC looks to be tapping comedy superstar Seth Rogen to help bring Preacher to the small screen. This news obviously has yet to be confirmed, but that didn’t stop Rogen from hinting at his possible involvement yesterday via his Twitter:

I don’t think Rogen is the absolutely perfect person for the job of overseeing a Preacher television series, but then again if he was handed the reins I wouldn’t be opposed to the decision. Together with his friend and writing partner Evan Goldberg, Rogen has been partly responsible for three of the funniest comedy films of recent years: Superbad, Pineapple Express, and This is the End (which he and Goldberg directed as a team). When it comes to writing honest and empathetic characters you can’t help but love despite their myriad of flaws, Rogen and Goldberg – who is assumed to be working on Preacher as well – certainly know what they are doing. Plus, you can look to This is the End as a great example at handling religiously controversial material with humor and energy.

Personally I would love to see a Preacher TV series happen; serialized television is really the only venue that can do Ennis and Dillon’s blasphemous brilliance proper justice. But would AMC be the right network for such a show? They’re rightfully praised for taking chances on shows no other channel would ever air, but in the past few years AMC has earned its fair share of enmity for their shoddy treatment of the series that made them a force for original programming to be reckoned with in the industry and the creators responsible for their success. A show like Preacher would require a decent budget and a lot of creative leeway and you can’t relegate an entire season to a single location as the network has forced The Walking Dead to do thanks to their skinflint ways. Things can go either way at this point. First, let’s wait and see if it’s actually happening.