From comic book superstars Jeff Lemire, Matt Kindt, and Paolo Rivera – the year’s most epic new adventure ratchets up the stakes as Bloodshot is drafted into the eons-old war against mankind’s oldest, darkest enemy!

The Immortal Enemy has crawled out from the black depths of history to destroy this generation’s Geomancer and send Earth back to the Dark Ages! Now…the Eternal Warrior, Ninjak, and Kay McHenry must overcome their worst nightmares before the unlikeliest of white knights rides in to save the day. Will he be enough to battle back the unyielding evil that threatens to plunge the Valiant Universe into the darkness?.

From the New York Times best-selling team of Fred Van Lente and Clayton Henry comes a centuries-spanning race against the clock, straight out of the pages of ARCHER & ARMSTRONG!

Prehistoric empires! Dystopian futures! And everywhere in between! The past, present, and future of our universe are about to meet an untimely end, and only the mysterious Ivar Anni-Padda can prevent all three from collapsing in on themselves. Unstuck in time, and pursued by enemies simultaneously across every moment of his time-lost life, can the man called Timewalker save everything that ever was, is, and will be? Get ready for a clock-stopping odyssey into the distant past and far future as the most unlikely Valiant hero of all leaps into his first history-ripping adventure!

Multiple Harvey Award nominee James Asmus (Quantum and Woody, The Delinquents) and Eisner Award-winning artist Steve Lieber (Superior Foes of Spider-Man) are here to bring the most talked-about, most award-not-winning-est heroes in comics to a whole new high! Unfortunately, there are a bunch of people that would like to kill them up there.

They came. They saw. They pissed off a whole lotta folks. And now a team of mystery vigilantes has singled out the world’s worst superhero team for complete and utter destruction. Their first target: their minds! But who are these all-new enemies? Are Quantum and Woody hitting it off with a sexy duo of cat burglars? And, dear god, what have they done to the goat? Is this the real life? Is this just fantasy? Sex Criminals isn’t the only comic that can quote Queen, comics fans – here come Quantum and Woody! (Or so they think! [Trippy, right?!])

As 41st century Japan spirals into chaos, will Rai protect his nation…or help tear it down?

As Rai grapples with a life beyond the control of Father, new feelings distract him from uprisings, secret armies, and a bomb that could all doom the mission to free New Japan before it even begins! Matt Kindt and Clayton Crain’s astonishing saga of the year 4001 rockets toward a terrible reckoning as “Battle for New Japan” continues! 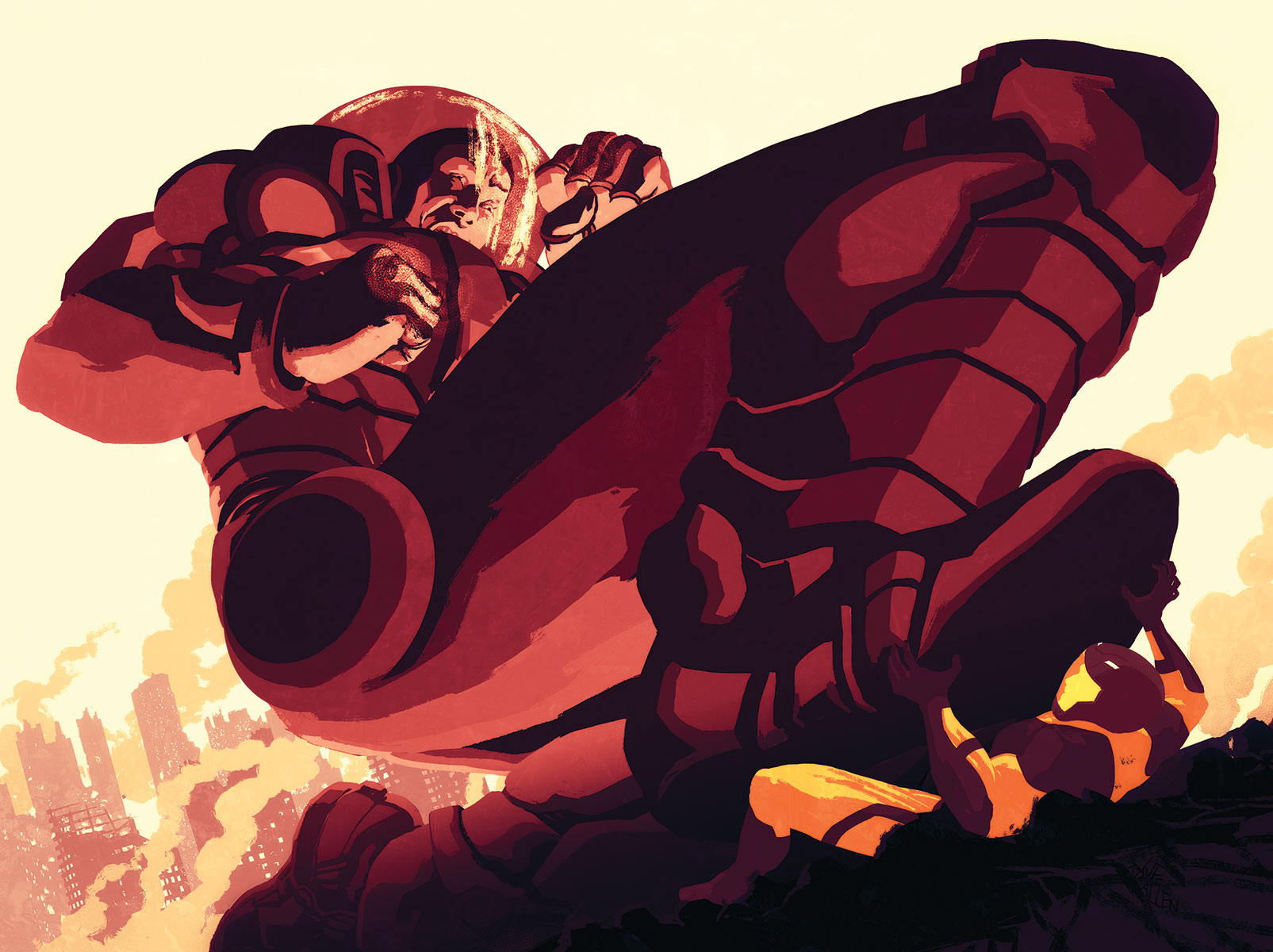 Small package…heavy hitters! ENTER: ARMORINES smashes into a GIANT confrontation that will rock X-O Manowar to his very core!

The bleeding-edge commando unit codenamed: ARMORINES has finally undermined the X-O Manowar armor and the man inside it – Aric of Dacia, one of the most feared men alive. But who are these hardened men and women, and just who orchestrated their lethal combination of technology and cunning? The new generation of ARMORINES are more than just mercenaries…and the figure pulling their strings is about to activate a fail-safe that will leave the world reeling.

A world on fire! Unity vs. The United!

A dark secret at the heart of the Unity team has led the world to the brink of global war. Only Unity and their international counterparts, The United, can broker a peace…but that might not work, seeing as how they’re trying to kill each other. All hope lies with Unity’s newest team member, who may not be able to shoulder the weight of the world!

The Eternal Warrior’s gambit to save an oppressed people…has seemingly failed. Will he fall short of his mission on behalf of the Geomancer?

With steel sparking and axes clashing in battle, the hero of countless wars since time immemorial may yet find success…by laying down his weapons and yielding the fight. The field of battle will run red when this epic anthem of warfare and heroism by master storyteller Peter Milligan (Hellblazer) and Eisner Award winner Cary Nord (X-O Manowar) roars into its final chapter!

Scarred, transformed, and strengthened, Dr. Mirage returns from the perils of the spirit world to face the treacherous men who would erase her from existence…with everything to fight for and nothing left to lose! Do not miss out on the haunting climax of the critically acclaimed, sold-out series that Comic Book Resources calls “equal parts clever and emotional as it sets up an impressive new hero.”

Back together! Back in the tights!  Back in action! Christopher Priest & MD Bright’s long-awaited return to the world’s worst superhero team hits full swing!

Quantum and Woody suit up and zero in on the mystery that may have caused the new Quantum to disappear…and the new Woody to exist in the first place! But Eric Henderson knows more than he’s letting on. Can Woody trust his one-time partner again…and together can they manage to stop the global intelligence networks and their worldwide conspiracy?

This is your chance to find out why VALIANT is the MUST READ superhero publisher in comics today with the second value-priced collection of Valiant’s greatest hits! Re-presenting RAI #1, ARMOR HUNTERS #3, QUANTUM AND WOODY: THE GOAT #0, THE DEATH-DEFYING DR. MIRAGE #1, and HARBINGER: BLEEDING MONK #0 – plus sensational short stories from X-O MANOWAR #25 and ARCHER & ARMSTRONG #25 – start reading here to find out why IGN declares, “If you haven’t jumped on the Valiant bandwagon yet, now is the time.”

Peter Stanchek. Toyo Harada. The two most destructive superpowers in the world — literally — have come to a reckoning of will, and in the fallout of their cataclysmic conﬂict, each will come to grips with a world in which the other is free…and unchecked. Their former families, the Harbinger Foundation and the Renegades, lie in shards around them. What will stop these men — either of them — from reducing the world to ashes?

Jump on board the convention-defying series that the Onion/A.V. Club calls “the crown jewel of Valiant’s line-up” as New York Times best-selling writer Joshua Dysart and red-hot artists Rafa Sandoval, Khari Evans, Mico Suayan, and Stephen Segovia close the door on one generation of Harbinger Renegades…and prepare the foundation for another. Collecting HARBINGER: OMEGAS #1–3 and HARBINGER: BLEEDING MONK #0.

The most nominated series of the 2014 Harvey Awards!

Once upon a time, Eric and Woody Henderson were inseparable. Adopted brothers. Best friends. Brilliant minds. Years later, they are estranged siblings, petty rivals, and washed-up failures. But when their father’s murder leads them into the throes of a life-altering accident, Eric and Woody will find themselves with a whole new purpose – and a perfectly legitimate reason to wear costumes and fight crime. Go big or go home, folks! Quantum and Woody are coming!