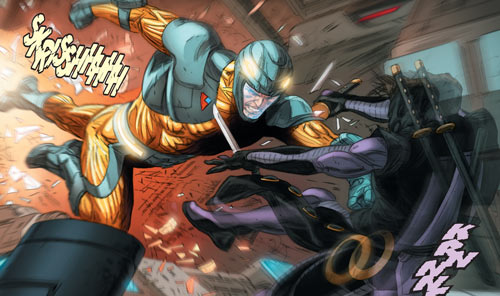 The big day has finally arrived! This is it… UNITY #1, the 40-page first issue of Valiant’s next ongoing series, is now available for review! UNITY #1 is already well on its way to becoming one of 2013’s biggest debuts from an independent publisher with more than 68,500 units in initial orders.

But it’s not just a number. As you’ll soon see, Matt Kindt and Doug Braithwaite have delivered an action-packed, widescreen comic book clash of the tallest order, pitting Valiant’s first superteam against the colossal threat of X-O Manowar.

This is a series that requires zero knowledge of what Valiant’s been up to so far — it’s a built-in jumping-on point for not only the new UNITY ongoing series, but each and every one of Valiant’s monthly series. Be sure to follow the new standalone, UNITY tie-in arc from Robert Venditti and Cary Nord beginning one week later in X-O Manowar #19!

To kill a king, he has created an army.

The world’s most dangerous man, Toyo Harada, has been struck by the one thing he never thought possible – fear. Halfway across the globe, a new power threatens to topple modern civilization and, to preempt the cataclysm that is to come, Harada will unite the most lethal, most volatile, most unforgiving team the world has ever known – UNITY. Their mission: defeat the warrior king armed with the universe’s most powerful weapon. Kill X-O Manowar!
Be here when New York Times best-selling writer Matt Kindt (Justice League of America, Mind MGMT) and superstar artist Doug Braithwaite (Justice, Journey into Mystery) launch Valiant’s first-ever superteam into the landmark comic book event of the year with an all-new ongoing series in UNITY #1, featuring covers by a murderer’s row of comics juggernauts – Doug Braithwaite, JG Jones, Bryan Hitch, Paolo Rivera, Clayton Crain, Travel Foreman, and Neal Adams!
You’ve heard the buzz, you’ve seen the reviews. If you still haven’t jumped onto Valiant Comics, the time is now! This November, UNITY is the perfect entry point for new readers.
Share
Facebook Twitter Pinterest Linkedin